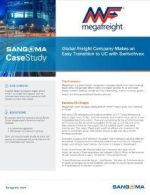 With about 250 employees and 4 additional offices at O.R. Tambo International Airport, Cape Town, Durban, and Port Elizabeth, each location made use of its own independent telephone system. They were accustomed to the simplistic business communications the old system provided— all the way up until the time when they received notification that support for the outdated system was being discontinued. That meant Megafreight would be without phone service in the event of a hardware failure. And a phone service outage was not a risk the company could take.

During the analog-to-VoIP transition, the global freight company looked at different alternatives. It became obvious that those systems were outside the company’s budget, according to Dyllan Pascoe, the former IT manager at Megafreight.

Given the exchange rate, Pascoe noted that it becomes very expensive to implement some of those proprietary technologies in South Africa, so the adoption of open source solutions was a “no-brainer” if it could do the job.

“I knew Switchvox could do the job,” said Pascoe. “We also felt Switchvox was a lot easier to configure as an administrator, and it does not require special telecom or IP qualifications to operate the system.”

Megafreight purchased a Switchvox appliance with 200 Sangoma D-Series IP phones. Since each branch of Megafreight made use of their own independent phone system, the upgrade began with the executive offices in Johannesburg. The deployment of Switchvox in the other branches followed shortly after the executive offices were set up. Now, all four branches operate as a single unit with the Switchvox appliance centralizing communications at the Johannesburg headquarters. Customers can call into one phone number and the versatile Switchvox call trees are configured to transfer pertinent calls to the appropriate staff member or department anywhere in the country.

Ordinarily, the transition from analog to VoIP would be a major undertaking, but with Megafreight operating on an open source platform, they did not need much of an overhaul. “Megafreight has a tailored solution supported by a highly effective home grown software freight management system,” explained Pascoe. “We had to make certain the network infrastructure could accommodate the new Switchvox system, which required a 100/1000 (BaseT) network, so even though we already had switches, cabling, et cetera, an upgrade of those network switches and cabling was required.”

As part of the installation, the company also had to ensure their network connectivity capacity could accommodate the VoIP traffic, and that the network had Quality of Service (QoS) to ensure day-to-day traffic would not interfere with voice calls. For example, using fiber optic connectivity, they had to configure the switches to ensure VoIP traffic gets priority on the network. For the most part, however, Megafreight’s infrastructure met all the requirements needed to set up and implement the Switchvox system.

The legacy analog PBX, with its behemoth server, took up 20 square meters of floor space and required its own room. It had been upgraded and patched with add-ons over the years to give it more functionality, but it was difficult to manage with this piecemeal approach. The new Switchvox phone system resolved all of those inconveniences and management issues.

Long-distance charges between Johannesburg, Cape Town, Durban, and Port Elizabeth were another expense eliminated by the Switchvox system. Now, when a user from Cape Town calls a customer located in Johannesburg, the Switchvox system is configured to route the call via the Johannesburg office, saving money on long-distance calling. In terms of additional savings, there were support contracts in place at some of the branch locations while others were charged on-demand. Those have been completely eliminated.

“Over time, as employees became more familiar with the system, we added additional functionality in order to take advantage of all the features Switchvox has to offer,” said Pascoe.

Call reporting capabilities, for instance, used to require a third-party installation and IT administrators had to set aside time to draw up the reports with the old system. Now, reports are requested through the system on a timed schedule and the system provides those reports whenever needed.

“Voicemail-to-email has been shocking for many employees because none of the branches had voicemail at all,” said Pascoe. “That feature required some policy changes because it affects how employees work with their customers, but in the end, it is an invaluable feature.”

Even the mobility feature caught on because it keeps technical personnel, who float around from location to location, or who operate from a remote location, connected.
“Once the system was completely implemented across all five locations, the true power of the Switchvox equipment with UC was known, and it has been a great experience for everyone in the company,” said Pascoe.