In addition to their full-scale grocery stores, Clark’s produces a variety of health-focused newsletters, videos, and recipes, among other resources. 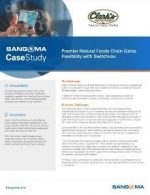 The leadership team of Clark’s Nutrition & Natural Foods Market chain understands the critical nature of customer service and had been waiting for the right time to retire their outdated analog phone system, and replace it with an advanced Unified Communications (UC) solution. When the opportunity arose to open their fourth store in Southern California’s populous Inland Empire, the plan for a new communications solution was finally set in motion.

Concerned that if the old phone system failed, it would create a communications void between customers, store locations, and the corporate office, tech-savvy CEO, Ray Clark appointed the company IT Director Carl Palmer, to research an affordable but flexible VoIP UC solution.

“Our CEO enjoys following technology, and he had built a sophisticated data network for the stores,” says Palmer. “He had been concerned about our telecommunications for some time and knew we needed to expand our data network to include voice. With the opening of a new store, and overall customer service as a top priority, he knew it was time to change and had a list of features he wanted in the new VoIP system.”

Primarily, Clark’s wanted all four locations interconnected to a centralized hub in Riverside so that customers could call one number and seamlessly connect to any of the stores.

Palmer then set his sights on mobility. Originally, since only a couple of the employees and store consultants move from store to store, he didn’t originally think a mobile app was needed. But suddenly, that mobile concept opened up possibilities not previously considered, such as more flexibility for the employees and more convenience for the customer.

Also important in a phone system solution, Clark’s did not want to have to call in outside support for the system. Having a system they could completely manage internally was a priority. “It was not only expensive but time-consuming to call in something as simple as a menu change or a new extension,” says Palmer.

Finally, the CEO wanted protection against any potential cause of a power outage.

They worked with NetGain to design and build an internal MPLS network with survivability — that is the ability to maintain uninterrupted service regardless of the scale, magnitude, or duration of a failure. They also purchased a cold spare that would provide immediate backup to cover the transient period following any faulty occurrence, in case of a complete power outage.

Their versatile Switchvox system featuring advanced UC functionality acts as the central hub from within the corporate headquarters in Riverside. The system supports users in all four store locations.

Currently, Switchvox has all four of their stores connected to the hub in Riverside. Customers are directed to any store or department within the chain by an easy-to-program IVR.

The staff is also seeing immediate impact with the Switchvox solution’s mobility features.

“Now we have over fifty extensions using the mobile app on iPhones on the sales floor. Each salesperson now has their own extension; so, if a customer comes in and talks to someone and has more questions later, they can call that extension directly instead of starting over with someone new.”

“Time changed our needs,” says Palmer, who chuckles when he talks about the extremes of switching from an old analog system to VoIP. “[What we had] was a plain old analog phone system complete with its DOS-based punch down server. It is probably hard to believe, but we were so concerned about the system overheating and crashing that we actually removed the door of the CPU on one of the servers and placed a desk fan in front of it to keep it cool!“

He says they considered several Switchvox competitors while analyzing their needs. “There’s no question the price points with Switchvox were much better, but when we were able to just tick off all the features Switchvox offered against our list of priorities, we had no doubt Switchvox was the best choice,” Palmer says.