Skip to content
Menu
Menu
Get a Quote
A Success Story
Iconic, Family-Owned Motorcycle Dealership Saves Money While Future-Proofing and Streamlining Their Communications.

Appleton Harley-Davidson has been a family-owned business for over 45 years in Wisconsin’s Fox River Valley. Built on a passion for the iconic Harley-Davidson brand motorcycles, they provide sales, service, clothing, parts, storage, and education on how to ride. What makes this dealership so special to the Appleton community is the level of service and commitment that Terry Doughty and his son Josh Doughty (Company President) have offered throughout the years. The respect they have from the community will certainly be felt for generations to come. 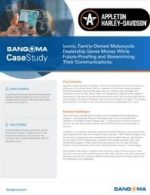 Their previously installed phone system was antiquated and complicated to program – and advanced features were becoming more of a requirement. Operations Manager Shelley Draeger said, “Looking at the Switchvox system upfront, we saw tremendous savings and the efficiency that would propel us forward.”

In addition to simplifying everyday use and increasing efficiency, there were a few other requirements that were unique to their business. “With Harley-Davidson, we are big into our brand and want everything we do to reflect that; so, the ability to put our logo on all the telephones, and even have orange handset cords, was outstanding imagery. When customers see a phone with the logo and color scheme, it reminds them of our iconic Harley-Davidson product.” said Draeger.

When asked what type of research they did when trying to find a solution, they said that  everyone and everything was on the table, but the main three takeaways were the same for all: a phone system that has advanced technology, ease of use for employees, and upgradable.

“We considered the big names: Cisco, Mitel, and even RingCentral. Our concern was not just upfront costs, but all the extra costs that might come up afterwards. We wanted call centers, mobility options, the ability to program it themselves, and in-depth call reports as a start and that added costs with the other vendors,” Draeger explained.

After considering the options, Sangoma’s Switchvox E510 appliance was installed.  The new line services were delayed, so Unitel, Sangoma’s Partner of the Year, integrated the existing PRI with an Adtran Total Access 908 until the new services came in. They also implemented an Ubiquiti ES-48-500W to power the phones. The building across the street already had IP phones running off the old phone system, so the network infrastructure was already set.

The network consisted of a PC VLAN and a Voice VLAN setup by Harley-Davidson’s IT staff using a Meraki firewall and Meraki switches. They also extended PC and Voice VLANs over to Ubiquiti ES-48-500W switch.

Unitel then installed the Switchvox phone system, as well as Adtran and Ubiquiti switches to test the network environment. When determining a cutover date, Unitel thoughtfully worked with the customer on a schedule that allowed installation of the new phone system without impacting Harley-Davidson’s normal business hours while remaining socially distant with limited staff on site.  Shelley adds, “Unitel has always been very informative and straightforward on what are the best options. We trust their expertise.”

The immediate reaction after the Switchvox implementation was excitement. The staff was happy to see the touch-screen phones and were particularly fond of the ease of use, embracing the Switchboard due to it’s dial out capabilities. Harley-Davidson is a large company with a campus environment, so with employees being physically spread out, the Switchboard made it seem as if they were all under the same roof.

The first major result is the significant impact that replacing their current phone system had on their phone service cost savings. Harley-Davidson moved from a digital T1 to a SIP channel interface and was able to consolidate line services to the main building.

At the beginning of Spring, Appleton Harley-Davidson would receive about 750 calls from customers wanting to get their motorcycles out of storage. So, the Switchvox Switchboard was a tremendous help in processing the substantial influx of calls while also streamlining efficiency in the office. Also, the ability to see activity across the company on the Switchboard saved them time and increased mobility, as well as staff efficiency.

“The Switchboard, the touch-screen phones which are similar to smart phones, call reports are extremely helpful, and auto attendant functionality is huge. There are so many features, so we are still learning,” said Draeger. And with Switchvox, all of these features are included at no extra cost.

Lastly, when Draeger was asked why did they choose Sangoma, and if there was any advice they would share to others trying to make a decision on their next phone system, he responded,

“Unitel offered free orange cords to go with the black touch-screen phones, matching Harley-Davidson’s color scheme. This told us that Unitel listened to our wants. They are very customer-service oriented. 5 Stars.”

During the sales process, Sangoma provided an online webinar and digital training materials to ensure the installation went smoothly during the COVID-19 pandemic. Unitel’s customer service representative, Haley, also hosted in-person training. These combined efforts helped Appleton Harley-Davidson understand the Switchvox phone system with ease. According to Draeger, they have already been able to see some cost savings due the ability to program the phones by themselves. The staff have also been able to create on-hold messaging and move employees offices around without fear of reprogramming their desk phones.

“The Switchvox system came with all features included, so we knew from the day we purchased it that we would be set and not hit with more costs after the fact. We looked at the big picture, rather than simply focus on the telephone system. Unitel evaluated the front end of the system, line and internet services, our infrastructure needs, and even put Disaster Recovery on the back end. The big-picture approach meant looking ahead to the future with our new system that will give us huge cost savings and any and all features we could ever need for years to come,” said Draeger.