Gettysburg School District Gets More UC for Less with Switchvox

The Gettysburg Area School District is located in Adams County, Pennsylvania, and consists of three elementary schools, a middle school, and a high school. These institutions aim to provide a safe and caring learning environment for students while preparing them to work, learn, serve, and succeed. 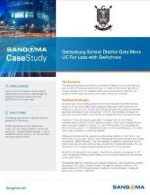 Six years ago, the Gettysburg Area School District (GASD) found themselves caught in a frustrating web of technological challenges when it came to their telecommunications. At the time, their failing analog phone system prompted a quick but necessary move to voice-over IP (VoIP). After making it through the transition to a new system, administrators thought the worst was behind them.

However, in less than seven years after the deployment of their robust Hewlett-Packard 3Com VCX VoIP telecom system, school district leaders found they once again needed to replace the ‘new’ VoIP system. HP had placed the 3Com phone system in “maintenance mode,” which essentially gave it no viable future and, ultimately, no technical support.

“Because we had recently replaced our old analog system with the 3Com, our VoIP infrastructure was in place,” says Gettysburg Area School District technology coordinator, Jeffrey Williams. “We had a ballpark budget for replacing it and we knew what we wanted in terms of features and the functionality needed. But we still took our time researching and accepting bids from other vendors.”

In addition to losing technical support, the district’s servers were aging out. HP wasn’t prepared to replace those either, so they took the opportunity to consider some other options.

Gettysburg began by reaching out to Dauphin Datacom, a local Switchvox reseller. According to Kurt Mark, Senior Territory Manager for Dauphin Datacom, the experience with HP left many telecom resellers, like his company, holding an empty bag with their customers.

“They kept assuring us they would stand behind the product, but it wasn’t long before we realized that wasn’t happening. And it left us with egg on our faces,” Mark admits. “The misfortune of replacing their 3Com after only six years was a hardship for Gettysburg Area Schools, so we decided to take a different tactic this time.”

“We looked at one hosted solution that definitely had some benefits,” Williams says. “In the long run, I decided I liked having it in-house where I could control and manage the implementation with as little complexity, care, and feeding as possible.”

Gettysburg was also not willing to give up anything in terms of features and functionality, and they had some security customizations that required easy streamlining and integration with other software as well.

Some of the customizations included making sure calls go into each and every classroom, and that it is tied into the intercom system. There was also enhanced security needed throughout all the schools in the form of a 911 emergency alert system.

“They also had a unique need for integrated security,” says Mark. “They had a camera at the entrance to the service department that needed to be hooked up and integrated into the phone system so the offices didn’t blindly let people into the building without seeing who it was. That product was manufactured by a third party, but the Switchvox integration went flawlessly. Switchvox is excellent when it comes to compatibility with third party or even proprietary software, and it is a capability we promote everywhere.”

With the budgetary restrictions and customizations that the school district required, Mark’s instincts told him that Switchvox UC solution was the way to go.

With all five schools now connected to the main hub in the main administration building, Switchvox provided the kind of consistency and permanence that would prevent GASD from having to worry about replacing the whole system in six, ten, or twenty years.

The Switchvox business communications solution with UC is always being improved and updated. This expands its functionality while keeping it flexible, versatile, and fully supported.

While “big box” systems may sound stable, the fluidity of telecom technology and the volatility of corporate mergers and acquisitions in the telecom market make Switchvox the better, more enduring choice.

Some of the school’s favorite features include mobility and phone apps.

“The mobile app is very important for our district teachers and supervisors who often travel from school to school,” says Williams. “They can call and receive calls on demand rather than having a receptionist track them down or leave messages. They even have voicemail-to-email integration so they never have to lose a call if they are in a meeting.”

“We were pretty tight on budget when it came to buying a new telephone solution, but in the end, we came in about 10 percent below that budget, so it all worked out great from our standpoint,” says Williams.