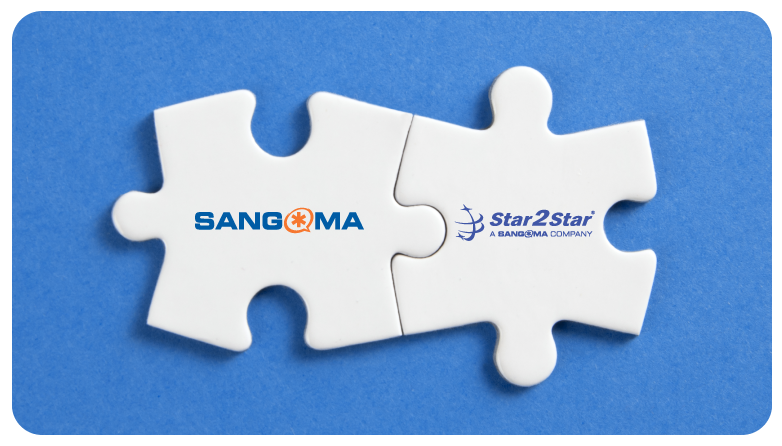 On January 29th, Sangoma announced a definitive agreement to acquire Star2Star, a cloud-based Communications as a Service provider with a leading UCaaS offer. We’re pleased that the deal closed last week.

So, why did we do this deal? First off, Star2Star targets medium and large enterprise and managed service providers, with channels that don’t really overlap with Sangoma, so the “fit” is very nice. Star2Star has almost 10,000 business customers with tens of thousands of locations. We feel like now we can confidently go after and win the full spectrum of UC prospects, from small business to large enterprise.

Together, we will have increased scale, and given both of us are profitable, we will remain a profitable entity with approximately 70% recurring revenue. As a Channel Partner or end-customer, you shouldn’t have to worry about whether we’ll be around in the future. Whatever side you come from, the transaction represents a very positive development for the future of the new Sangoma (the combined company) since there will be benefits from the improved scale/financial stability, a broader portfolio of products, expanded global services, and a continued commitment to invest in innovation.

We feel we’ll have the most complete UC portfolio in the market: From on-premises to Cloud UC that can work in businesses of all sizes, with our own phones, headsets, gateways, SBCs and SIP Trunking. As such, a business would be able to deploy Sangoma products across their entire enterprise, avoiding any interoperability “finger pointing” which crops up sometimes. Additionally, we’ll have a full suite of Communication as a Service offers, from UCaaS to Video Meetings to Collaboration to Wholesale Voice Services to Access Control. Truly all that a business needs from a single vendor, obviating the need to put all kinds of different communication products into your enterprise network.

During the past few months, when we were not yet closed, we understandably received questions about the future of the different UC platforms. Yes, we understand them. We got the same ones when Sangoma merged with Digium and we said both Switchvox and PBXact would remain. And both have remained. So we certainly understand. And all UC platforms will remain now.

As I intimated above, the target market overlap was not that great. Switchvox and PBXact predominantly served the SMB. And both are also on-premise products in addition to cloud products. And Star2Star predominately services the mid-size enterprise to MSP market, with a cloud offer. Because of that, all platforms with remain as long as there is market demand for them. We may choose to do work to consolidate to a single mobile and desktop client, like we have done with Sangoma Connect for Switchvox and PBXact, and other similar things, but there are no plans to announce any of that in the short term.

And Sangoma plans to continue to sell, develop and support our hardware business including phones, cards, gateways, SBCs, and UC appliance businesses. And we also plan to continue to be the stewards of Asterisk and FreePBX. So, no big changes.

Right now, we need to integrate the teams and that will take some time. Customers on both sides will continue to receive the same products, quality and service they have come to expect from both companies.

Jim Machi is the Chief Product & Marketing Officer for Sangoma. He is responsible for Sangoma's overall product strategy including driving customer oriented cloud communication as a service products to the market and for developing and executing the global marketing plan including digital strategy, partner marketing, content generation, branding and lead generation activities. Prior to Sangoma, Jim spent significant time at Dialogic and Intel in various roles, including business unit general manager and SVP of product management and marketing. Jim has a BSEE from the University of Pennsylvania and an MBA in finance from New York University.
View all posts by this author

Why Collaboration Tools Are Important

Why Collaboration Tools Are Important