Situated in the midwestern United States, Wisconsin is home to nearly 450 school districts and over 2200 public schools. Each year, schools across the state educate millions of young students, while creatively working around tight budgets and growing student populations. 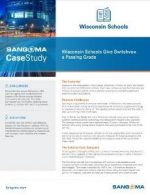 Security is a top priority at schools nationwide. In Wisconsin, the state passed a $100 million-dollar School Safety bill specifically for schools to upgrade technology in response to security concerns. This sparked school systems across the state to step up in solving these challenges.

It was imperative for Wisconsin schools to not only update their communications platforms but also to build out new security measures for keeping students and staff safe. Wisconsin schools needed to find a phone system that could meet these needs.

School systems throughout Wisconsin turned to the award-winning Switchvox UC platform for an upgrade to their aging phone systems and as a means to facilitate much-needed security measures.

The Switchvox Unified Communications (UC) system is developed around universal network architectures, allowing it to be seamlessly integrated into many technologies. This made it possible for UniTel, Inc., a Switchvox reseller in Wisconsin, to customize functions with Switchvox using third-party equipment. UniTel, for instance, was able to install an IP desk phone with a camera and integrate it seamlessly into a Switchvox system so a receptionist can see the person requesting entry and then push a button to release the door lock.

This standards-based status also allows Switchvox to integrate with Emergency Notification Systems (ENS), the standard in schools for when emergencies arise. One of the most popular ENS software packages for sending mass notifications in real-time to school and mobile phones is called Quicklert, and it is 100% integrable with Switchvox.

Another reason why many Wisconsin schools chose Switchvox is because it can be deployed on a dedicated appliance, in the cloud, or in a virtual environment, allowing each school to select the deployment method that best fit their needs. In the future, schools can seamlessly move from one Switchvox deployment type to another at any time as needs arise.

“We started by replacing our old digital Toshiba phone system with a Switchvox virtualized system,” says Sadie O’Brien, IT director for the Shiocton School District. “We believe in technology, and the timing couldn’t be better as we had just installed a new door access system that we will be integrating with Switchvox for security. And we will later be integrating the Quicklert system and potentially purchasing some new smart speakers throughout.”

Switchvox also gives faculty and staff additional flexibility in how they communicate – both on and off campus.

With Switchvox, up to five devices can operate on a single user license. This means teachers and administrators can communicate using Switchvox with their desktops, laptops, desk phones, mobile phones, and tablets.

They can utilize the Switchvox mobile app to call parents and others using their school number, so their personal cell phone number remains private. Teachers also enjoy the ability to use the mobile app to change their phone status so others know if they are in their classroom or away.

The Switchvox voicemail-to-email feature allows staff and teachers to receive an email when messages are left on their desk phone. These messages can be accessed visually on their personal devices, giving them the freedom to listen to voicemails wherever they are. Another useful feature is the ability to record calls and have them sent to their email to be saved or forwarded to administrative personnel in the case of difficult situations.

Other features Wisconsin schools are enjoying include integration with desktop computers; call accountability so the user can see incoming, outgoing, and missed calls; Interactive Voice Response (IVR) that automates the process of directing calls to the proper person or department; and call center software to help schools manage calls during periods of heavy call volume.

Their reseller, UniTel, Inc., provides the schools with what O’Brien says is an excellent tracking system for determining savings based on their new Switchvox system. “It looks like we are saving about $400 a month so far, and we are about to make more changes in our providers that will potentially open up even more savings.”