Headquartered in Kortrijik, Belgium, Van Marcke Wholesale is a distributor of heating systems and inspired products for the bathroom and kitchen. The family-owned company has 1,400 employees throughout the Netherlands, France, Luxembourg, Switzerland, Malta, and the United States. 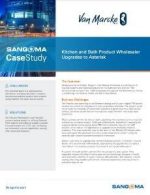 Van Marcke was operating an old Siemens analog and a Lucent digital PBX phone system that could not integrate with their proprietary software. The system could not provide the flexibility or bandwidth needed to support their four inbound call centers, let alone handle the communications needs for their most basic daily operations.

Most business owners do not consider upgrading their business communications systems as a creative project. Technical professionals, tasked with replacing old analog landlines and an aging digital PBX with a versatile, feature-rich VoIP solution, often look at the opportunity to upgrade as an artistically inspired endeavor. This was especially true for the team at Van Marcke Wholesale when they were given the go-ahead to build a customized phone system using the Asterisk open source telecommunications framework.

When it was time to upgrade their communications system, IT Director, Gruwez Guido, who was familiar with Asterisk, approached the opportunity to create a new telecommunications solution from scratch with great enthusiasm.

A custom in-house system seemed like the company’s best option. They especially enjoyed the idea of using open source technology because it would have economic benefits. A custom solution afforded them the freedom to build exactly what they needed with almost unlimited capabilities; and they knew it would be easy to use.

Asterisk is the world’s most popular and versatile open source telecommunications framework. It provides telecom engineers, technicians, and even hobbyist developers a flexible, affordable way to build a customized telecom solution with its virtual toolbox of applications. Sponsored and maintained by Sangoma, Asterisk powers IP PBX systems, VoIP gateways, and conference servers. It is at the heart of systems used by call centers, carriers, governments, and businesses of all sizes worldwide.

“We used Asterisk at a trade fair (tradeshow) in Italy, to connect our colleagues to the main offices in Belgium,” says Guido. “It worked so well, we decided to adopt it as the framework for building a new telecom system from scratch for the whole company.”

The new system would connect 120 distributorships and 1,400 employees throughout Belgium, France, and Luxembourg, as well as three U.S. locations in Phoenix, AZ; Dallas, TX; and Las Vegas, NV.

The Van Marcke team, led by Guido, consisted of “techies” who take their jobs very seriously.

“We learned Asterisk step-by-step over the Internet and built our Asterisk phone system from scratch, top to bottom,” says Guido. “The most difficult part was connecting it to our landlines and to the existing Lucent PBX. Originally, we used ISDN and PRA cards.”

The ISDN cards let them simultaneously integrate voice with data over their E1 carrier line, and the Primary Rate Access card (also known as a Primary Rate Interface or PRI) linked it with the Lucent PBX to give them total control over the flow of all incoming and outgoing calls between the different systems.

“We later simplified it by replacing the ISDN lines with a Patton SIP media gateway,” Guido says. The gateway not only terminated long distance phone charges, but it built a bridge between the legacy Lucent PBX and VoIP.

According to Guido, Asterisk’s ability to deliver total customization had many benefits for Van Marcke. They went step-by-step, from one site to the other, converting digital systems to VoIP, and they added an automated Interactive Voice Response (IVR) system; call monitoring capabilities across 120 sites in four countries; as well as voicemail, text-to-speech, fax, and voicemail-to-email.

“The only surprises we experienced were the realization that we could do practically anything we wanted with absolutely no limitations unless it was our own lack of knowledge and creativity,” Guido laughs. “The best part of the project, however, is that we are saving about 2000€ per month!”