Based in Ashland, Virginia, Target Marketing sources the highest quality marketing products to help their clients be seen and remembered. Experts in the delivery of operational supplies and equipment, brand experience, and promotional marketing, their core markets and areas of most expertise are the health care, automotive, and academic sectors. 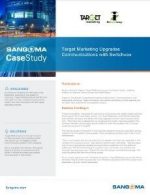 Timing is everything – especially for a growing small business that needs a better business phone system for its new office location. For Target Marketing, a promotional marketing and fulfillment company, the decision to finally upgrade could not have come at a better time.  They knew that a replacement for its aging phone system was long overdue. The company had been using a legacy phone system for over two decades and it no longer could receive service or support.

The need for greater functionality in their business telecommunications resulted in serious research into what options were available. Many competing solutions were in the mix for consideration.

“The current system was running steady but we needed more features, especially in the Unified Communications arena,” says systems administrator Ryan Buffa. “We have about twenty-five employees and needed converged phone capabilities with the option for softphones. We were also looking for a system with a computer user interface (UI), thorough reporting resources, multiple IVRs and call queues, and mobile phone apps. We were not getting that from the existing system.”

As a company operating within the Apple ecosystem, Target Marketing was quickly able to eliminate many providers because they run a Windows only-based client that would not be compatible with their internal operations.

Instead, Target Marketing, who manages online company stores and incentive programs for their clients, found the Switchvox option offered by Sangoma highly appealing. With a reputation for providing the most flexibility and UC versatility on the market today, Switchvox also holds a price point advantage that is consistently around 30% less than the average brand name telephony solution.

Although other projects delayed the initial, planned upgrade to a new system, the problems with the old phone system could no longer be ignored once the company decided to move into a new office building. After making the call to build out a new VoIP infrastructure, Target Marketing contacted CBSI, the Sangoma partner also based in Ashland. “Several vendors offered good products and could do the job, but looking at our budget of around $15,000, Switchvox continued to look better and better,” Buffa says.

CBSI offered Target Marketing a demo system, but Buffa purchased a smaller Switchvox appliance and installed it at their old location to test. “I decided to pull the trigger and hook up a couple of generic IP phones and a conferencing system to test the system over the next few weeks. I’m glad I did because it reassured me we had made the right decision.”

The timing could not have been better when Target Marketing finally moved into their new location. They were considering their options for purchasing business phones to go with the Switchvox system when CBSI mentioned that Sangoma offered IP phones designed for Switchvox.

“CBSI came out and did a demo of their new phones, and we were sold. They have a lot of the upfront programming already pre-configured. So all you have to do is plug in the phones, and the system recognizes them. We were ready to go.”

“Management demands that our customers always get a live person when they call during business hours,” says Buffa, “so in spite of having 25 employees, the additional sets are used all over the facility from the break room to the conference room and public areas. There is nowhere inside or even outside the building where a call cannot be answered, and there’s no reason for them to ever go to voicemail due to our extra phones sets, the convergence capability, softphones, and mobility.”

The extra phones and functionality add up to better customer service, with Target Marketing boasting 99% answerability.

One of the most widely used and highly regarded Switchvox features for Target Marketing is the ability to set up numerous IVRs and call queues. Target Marketing runs company online stores and websites for a number of their clients. They take orders, fulfill those orders, and ship from their location, so if you call and order company logo wear for XYZ Company, Target Marketing has a separate IVR for XYZ Company as well as for every individual client they represent.

According to Jamie Stapleton, president of CBSI, the nature of Target Marketing’s business exemplifies the power of Switchvox’s inbound call distribution capabilities. “They have a ton of IVRs. They do not operate like a call center but, instead, have sales support teams for every client. When calls for that client come into the queue, they are immediately routed to the right department and representatives.” This also helps the receptionist by distributing calls accordingly so she can answer only general inquiries.

“There are no additional licensing fees like there are with other systems where you incur additional costs for every little add-on. All that is included in Switchvox,” Buffa says.

“Also, one of the things I like as a systems administrator is how easy Switchvox is to configure. It is much easier than other systems I demoed, and everything is easy to customize to meets your company’s needs. I more or less set up and implemented the system myself with only a little technical help from CBSI, he says. “We shut down on a Friday afternoon to move and I came in on Saturday to do some set-up. We were running at full capacity Monday morning.”

That ease of configuration along with the many other advantages realized with the Switchvox system are not only validation of the company’s decision to go with Sangoma, but it’s a nice operational win for both Target Marketing and all the clients they service.

“Combine all the benefits we required, add the new D-Series phones, and include the ease of implementation, and you have a very happy customer,” says Buffa.