The Pet Hospital of Madison is a leading veterinary practice in Madison County, Alabama. The practice is dedicated to providing a variety of advanced services that focus on preventative and comprehensive wellness care for dogs and cats, as well as guinea pigs, rabbits, and other pocket-sized animals. 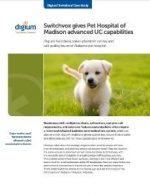 While building a new state-of-the-art building to house their veterinary practice, the Pet Hospital of Madison contracted with GigaParts, a local full-service IT and telecommunications reseller.

According to Ruth Freeman, the practice’s office manager, the Pet Hospital was initially impressed by a Pulsar360 phone system while occupying temporary office space. Once they moved into the new facility, the new phone system began to malfunction.

“It gave us nothing but problems,” Freeman says. “We had terrible connections, and the call quality was awful. I mean customers couldn’t hear us. It dropped calls, and customers complained that, on their end, the phone just rang and rang and rang with no one picking up. Unfortunately, it wasn’t always ringing here in the building.”

Additionally, when you ended a call on the Pulsar360 system, it did not disconnect. Instead, it would send a phantom call to the next extension, circulating phone by phone throughout the building without the ability to answer it or disconnect it.

“When you picked up, there was no one there…” Freeman relates. “It was infuriating!”

Ed Clifford, Sales & Marketing Leader at GigaParts, insists the problem was not with their infrastructure, saying they built a top-notch network with security, a guest network, and all of the latest switches and cabling.

“We went in over a weekend and programmed all the phones, ported over numbers, and had them ready to go live on Monday morning,” Clifford reports.

“For a business that is as customer service-oriented as the Pet Hospital, the Pulsar360 just could not perform in that location.”

The veterinary hospital’s new location, just two miles from the temporary location, was known for being widely affected by frequent ISP outages, but that was no excuse for Freeman and her crew.

“I spoke to Pulsar360’s top management several times, and they had GigaParts jumping through hoops, saying it was lag time or this and that. GigaParts was here for two straight days, not charging us a penny to try and get to the bottom of it, but before they had the system down to two cans and a piece of string, Pulsar360 could not solve the mystery,” says Freeman. “It was a phone system that simply did not know it was a phone system.”

That prompted GigaParts representative Chris Brewer, who had not been satisfied with Pulsar360 prior to the problems at the Pet Hospital, to decide that Switchvox was the better VoIP business solution. In fact, Brewer had just completed training and certification on the Switchvox platform. It was the perfect opportunity to see Switchvox in action.

GigaParts deployed an on-premise Switchvox installation, complete with a dedicated Switchvox PBX appliance and Sangoma D-Series IP phones. Built on a Unified Communications platform just as powerful as any enterprise grade system, Switchvox is administered through an intuitive GUI that allowed GigaParts to configure multiple users and quickly set the entire system up.

“They brought in the IP phones and set it up so that I could play with it over a couple of days,” says Freeman. “The first call I made was to my daughter who said the difference in call quality was like daylight and dark.”

The Pet Hospital of Madison could not be more pleased with their new Switchvox phone system.

One feature they particularly enjoy is the option to receive incoming faxes as emails instead of their fax machine printing hundreds of pages that veterinary records entail.

“With Switchvox, a fax comes in as a digital file and I can go directly to the information I need and discard the rest. It also eliminates coming in the next morning to all this paper on the fax machine that came in overnight,” says Freeman.

“I also like the mobility feature and the fact that if I’m out of town or we are closed for a holiday or a weekend, all I have to do is hit the ‘notifications’ button and Switchvox sends me notifications, and I can tap into the system and check my voicemail and email,” Freeman reports.

“If it can’t wait until regular business hours, I can call people back from my cell phone,” she continues. “When we are closed, the system also reroutes emergency calls to our 24-hour veterinary referral hospital in Decatur.”

Ultimately, Switchvox ended the challenges they faced with the initial phone system at their new location. Instead, Switchvox continues to offer the Pet Hospital of Madison the advanced features and functionality they needed to enhance their business communications and ensure a high level of customer service they aim to provide to their patients and patrons.