Founded in Missouri, St. Louis Foods is an ancillary food products provider for commercial restaurants across the Midwest. For decades, it was located in an old building with what the employees referred to as “spaghetti wiring” and a 20-year-old digital phone system that had didn’t even have basic phone system features like caller ID and voicemail. 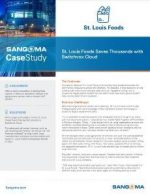 After their original phone vendor went bankrupt, St. Louis Foods had difficulty finding anyone who had knowledge of their old phone system technology or access to legacy replacement parts.

“It is impossible to describe exactly how antiquated and confusing things were with that old phone system,” says Switchvox reseller Matt Rygelski of PhoneWire in Fairview Heights, Illinois. “I was tied primarily to using replacement phones and limited by unreliable labeling and a complete jumble of phone wiring that was nearly impossible to trace. Cords were scotch-taped to broken handsets and the past phone administrator had used whiteout to label many of them!”

All that changed when a new generation of owners took over the well-established food distributor and relocated the facility to a newly revitalized section of the nearby city of Belleville, Illinois. Along with the new location came a modern office space with fiber optic wiring, new floors, fresh paint, updated office furnishings, and upgraded computers. All St. Louis Foods needed was a modern phone system to go with it all.

They did, however, have one unique request. Despite their new location in Illinois, they requested to keep their 314 area code in order to maintain their historical status as a St. Louis company.

“That area code functionality was big for us,” says Mike Truran, Vice President of St. Louis Foods. “Some brand devaluation goes along with being relocated in a different state, and there are many advantages to still being seen as a local company in St. Louis. We knew we had to be practical about it, but it was important to us that we still reflect that 314 number on both incoming and outgoing calls. We were committed to making that work for us in a positive way.”

Based on his experience with the company and his understanding of their goals and requirements, Rygelski led St. Louis Foods through a number of telephony options, including pricing a premise-based VoIP system and considering an upgraded digital phone system. The latter was a relatively inexpensive option but did not sufficiently address future issues. Ultimately, St. Louis Foods wanted to put an end to duct-tape fixes and find an affordable solution to their problems.

“You don’t know what you don’t know,” says Truran. “However, my goal was not to spend five figures on a replacement telephone system that in ten years, when that system is old and we need something more up-to-date in technology, we would have to pay yet another five or six-digit figure for a newer system to help us accomplish our goals.”

With that in mind, Rygelski had no hesitation about recommending Switchvox Cloud, the award-winning hosted PBX and full-featured Unified Communications (UC) solution.

“Now that we have Switchvox Cloud, it really makes you reassess the challenges of owning your own phone system,” says Truran. “We owned our old phone system and all the headaches that went with it. We didn’t have any technical support. If the phones went down, all we could do was call the phone company, and that never got us any quick answers.”

Switchvox Cloud is also instrumental in preparing the company for future growth. “They needed a lot of flexibility, and while their new office building gives them room to grow, their phone system did not,” says Rygelski. “If they wanted to add a telephone or move a phone from one location to another, they had to call a technician out to trace all that wiring in hopes they could find an open slot. The old system was full, and they had reached a point where the only way to add more phones was to buy expansion modules or cards.”

How much time and manpower a company wants to dedicate to managing an onsite telecom system is also significant. “One phone number, and we handle all of their routine support and programming,” says Rygelski. “With Switchvox Cloud, all the control takes place outside. In one day, everything is online, and the phones are plugged in and working.

Any functionality the customer can think of is all configured for them, such as integration with in-house software and mobile apps settings and setting up the auto attendant, IVR, call trees, and vendor restrictions. Plus, the customer’s server is in the cloud, so they have full redundancy and emergency back-up without needing to invest and configure an onsite cold spare,” Rygelski concludes.

In order to maintain an outside area code without all the complexities of monthly line costs, PhoneWire set up call forwarding using a Personalized Communications Service (PCS). When calls come in from the old 314 St. Louis area code, they are automatically forwarded to the company’s new 618 Belleville area code. With this call forwarding service, St. Louis callers won’t ever know they are calling the company in Illinois.

“Another benefit that we really enjoy are the call reporting features,” says Truran. “As a manager, with the old system, I never had any way of knowing who was calling or how many personal and business calls employees were receiving or making. I also wasn’t able to track or analyze any trends, like what days we seemed to get the most phone traffic and what kinds of calls they were. Having these features help us analyze our call volume and make better staffing decisions.”

Truran also enjoys being able to access his voicemails through his email on the Switchvox mobile app. “Switchvox Cloud lets you take your office with you when you are traveling, no matter where you go,” says Truran.

“Of course saving money can never be underrated,” continues Truran. “I know for certain that we have saved several hundred dollars per month on equipment and leasing fees with our new Switchvox Cloud phone system.”