Headquartered in Cleveland, Ohio with a second location in Chicago, Illinois, Martin Healthcare Group has provided over 10 million hours of high quality healthcare services over the past 40+ years.

With over 125 employees and over 200 independent contractors consisting of administrative staff, a variety of in-house and on-call physicians, hospital support staff, and dozens of employees hired to work off site, Martin Healthcare also has at least 20 partner locations and affiliates. 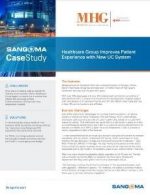 One of the well-known advantages of a Unified Communications (UC) phone system is Interactive Voice Response (IVR) technology, which automatically distributes calls according to a set of customizable rules, based on a customer’s reason for calling. That redirection can send calls to a call center to place an order; to a bookkeeping department to pay a bill; to a customer service representative to discuss a problem; or in MHG’s case—to a live receptionist to talk to a nurse or doctor, regardless of their office location.

“It was cost prohibitive for us to set up a network using the old system to connect everybody; and we couldn’t implement SIP trunks, which would save on long distance charges between Chicago and Cleveland and points in between,” says Brian Anderson, MHG’s IT Manager. He says having a live person answer every phone call during regular business hours was every bit as important as the costs associated with a new system, functionality, ease of use, and convenient features.

After two years of patching together digital upgrades to the 25-year-old Toshiba, and constantly monitoring eBay for obsolete hardware parts, Anderson’s department felt they were within months of a catastrophic failure.

“We had long outgrown the limited functionality of the key-based system, even with upgrades,” Anderson explains. “For instance, we added a voicemail module, which allowed us to get voicemail, but you had to be in the office to access it, and there was no remote notification capability.”

Martin Healthcare settled on a budget and began the search for the perfect new office phone system that could accommodate all of their requirements. They looked at traditionally well-known brands like Cisco and were seriously considering an Asterisk-based solution called Fonality until one of Ohio’s most experienced business communications service providers suggested they look at the original Asterisk-based business solution: Switchvox.

N2Net, located in downtown Cleveland, has been helping Ohio business customers increase productivity and profitability using both hosted PBX and SIP Trunk VoIP services for more than 20 years. Led by Sales Manager, Tim May, N2Net engineers are certified in the latest Linux and Asterisk platforms, and they bring nearly 100 years of combined programming and networking experience to every project. They are also a SIP certified Switchvox provider.

N2Net works with both Switchvox and Asterisk (sponsored and maintained by Sangoma). Asterisk is the revolutionary open source telephony software that allows experienced developers to build high customizable business communications solutions, including a PBX. It has, built into its core, advanced features like voicemail, automated attendant (IVR), call queueing, conference bridging, parking, paging, and intercom calling—features that are often sold separately in an ordinary commercial phone system, thereby driving up the cost.

“We knew about Asterisk but we hadn’t used it,” says Anderson. “When Fonality presented their demo and cost proposal, we were almost sold on it because of Asterisk; but we knew we wanted to host our own premise-based system and Fonality won’t let you host it 100 percent in-house. Switchvox, built on Asterisk, has an all-inclusive business communications system with UC that we could purchase and manage in-house, and its price point fit perfectly within our budget.”

As a family-owned business, MHG was clear that cost was one of the top two purchasing considerations for a new phone system and they had a very strict budget. And given their business philosophy on service, having a system that could easily deliver a ‘personal touch’ was the number one consideration.

“Switchvox, while affordable, was still on the edge of what they were comfortable spending,” says N2Net sales manager, Tim May. “When Brian saw the broad range of features, Switchvox fell right in line and they knew it would be a good fit.”

“Switchvox had all the key pieces we wanted,” says Anderson. “We could host it internally; we could flex back and forth between a live receptionist and the IVR after hours; it was easy to set up SIP trunks and a network we could share with remote employees, which eliminated long distance charges; it has mobile features; and voicemail-to-email with remote notifications.”

It also has some features Anderson admits he wasn’t expecting, but that have proven to be very popular. “We were not planning to implement phone queues, but now that we have them, they help with routing and answering calls, which has been great,” he says. “We had in the past used Salesforce CRM software, but we were not relying heavily on it because of issues with the old system; and we had been using proprietary software for call reporting that was easy to integrate into Switchvox.”

“We are relieved not to have to call someone in whenever we need to make even the slightest change,” says Anderson. “If we need to reroute phones, move them or add a new phone for an employee, in the office or at any of our remote locations, we can do it ourselves with almost no support. We are very happy with our Switchvox!”