According to the Times Higher Education Young University Rankings, published in 2017, London Metropolitan University is the highest ranked university in the UK. The University provides many services to support its students, staff, local communities and businesses. They have a goal of connecting their students with opportunities to boost their career skills. Businesses are offered a range of services including connecting students and support, as well as venue hire for events. From its purpose-built newsroom to the state-of-the-art super-lab, London Metropolitan University aims to create a stimulating and unique learning environment for its students.

For a university bustling with thousands of students, lecturers and support staff, it is mission-critical to keep everyone connected though seamless communication. Traditionally, the university’s communication was run on legacy Siemens iSDX platform. As the university continued to grow and expand, the need for a new communication systems increased enormously.

In the year 2017, the university’s technical department encountered a situation where they had to deploy approximately 150 phones in an area where the dedicated (traditional) voice cabling needed to connect to the legacy Siemens system was unavailable. The phones could not be setup, unless they found an alternate PBX system to which the phones could be connected. The tech team needed a quick solution that would let them complete this deployment and get the phone system working.

The main challenges were:

Louis Guadagno, the Technology Infrastructure Manager at London Metropolitan University, had extensive experience working with Asterisk-based systems and was familiar with the benefits that Sangoma FreePBX offered. He had also used Sangoma Vega Gateways in the past and was impressed by its resilience and workability.

The phone system came with pre-loaded FreePBX distro, very powerful hardware features and a comprehensive warranty. Out of the box, the system came with a string of FREE features ready to use. This included business features like calling queues, Interactive Voice Response (IVR), conference bridge, fax to email, ring groups, music on hold, voicemail blasting, wake up calls, announcements, etc. all crucial for a University telecommunication network.

Sangoma 3050G Gateway:
The Vega 3050G is a high density 50 port analog gateway from Sangoma which connects a large quantity of analog handsets and devices to an IP network, (typically either an ITSP or a corporate network). In the case of London Metropolitan University, this was a perfect to seamlessly integrate the 150 analog handsets to an IP core, eliminating the cost of re-wiring infrastructure to migrate to IP phones.

A102D PRI Card:
A Sangoma A102D PRI was installed to connect the traditional legacy PBX to FreePBX 300 Phone System, which was then connected to a SIP Trunk. The Sangoma A102D is a 2-port E1/T1 Port Voice and Data Card that supports up to 60 voice calls or 4.096 Mbps of full-duplex data throughput over two T1, E1, or J1 lines. The card was used to create a SIP-TDM Gateway with their legacy Siemens PBX to replace expensive PRI connection with SIP trunking to allow reduced call costs, reduced line rental, and bring extra flexibility and disaster recovery. 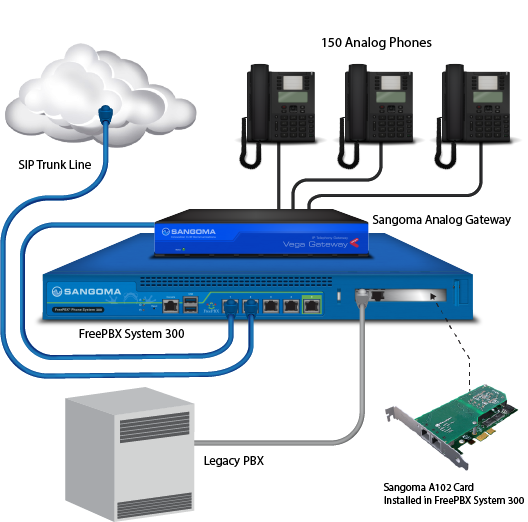 The Sangoma solution allowed the team to implement the system in the shortest time and within budget. This provided the fix they needed and minimised any downtime.

Benefits of using Sangoma FreePBX 300 Phone System in this setup:

Benefits of using Sangoma Vega 3050G in this setup:

Benefits of using Sangoma A102 card in this setup:

“As I have many years experience working with Asterisk in the past; I chose this solution (Sangoma FreePBX 300 Phone System) being familiar with the software but also having used Sangoma Vega gateways in the past, I was confident that an appliance -based solution would be the best fit for our requirement. I plan to keep the solution in place as it is providing inbound faxing and conference call services which as very flexible and easy to use.” – Louis Guadagno,  Technology Infrastructure Manager, London Metropolitan University