LifeCare Ambulance provides 911 emergency dispatch services to residents throughout Lorain County, Ohio. They provide 911 EMS service, ambulatory services, and wheelchair transportation services for Medicare and Medicaid patients to and from their medical appointments. 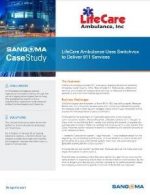 LifeCare’s legacy phone system, a Nortel BCM 450, was failing rapidly. Because Nortel went out of business several years after LifeCare purchased the system, the company had to make do with stopgap repairs since it was impossible to find anyone with the experience or parts to service it.

Finally getting the greenlight to investigate options for a new business communications system, Richard Pozywak, LifeCare’s director of IT, thought he knew what he wanted and didn’t waste time starting the process to upgrade the business phone system. When he received the initial quote for a new system from Cisco, Pozywak quickly realized the benefit of broadening the selection process to other telecom vendors.

“I wanted a Cisco phone system,” says Pozywak. “I was stubborn about it in the beginning, not considering anything else, until we talked to our Cisco vendor and got the price for a new Cisco phone system. Holy cow! We were looking at $300,000 to $400,000 for a Cisco system.”

Knowing the owners wouldn’t go that high, Pozywak gave up the Cisco pitch and began the search for other options.

Pozywak also considered another big-name option, but again he came across the same problem of expensive add-on fees for standard features and licenses. By the time he bought all of the add-ons LifeCare required for its communications needs, the company would have to spend a minimum of $100,000 out of pocket.

It was back to the drawing board. Pozywak says they considered a cloud-based solution and talked to several agencies comparable to LifeCare who use those systems, but none of them handled emergency calls. Instead, most of them primarily set up transportation for their clients. This prompted Pozywak and his team to eliminate that option.

The LifeCare team was somewhat familiar with an open source telephony developers toolkit known as Asterisk, which is sponsored and maintained by Sangoma. As they pondered the option of using in-house resources to build an Asterisk solution from scratch, they began to compare it to the Switchvox phone system. With Switchvox, there were no add-ons and all features were included and built into the web-based interface. The Switchvox solution seemed more than promising.

Pozywak was soon introduced to Tim May, whose N2Net company in nearby Cleveland is one of the leading Switchvox providers in the area and considered one of the best VoIP telecom specialists in the Midwest.

LifeCare purchased a Switchvox appliance along with nearly 50 high definition IP phones, 90 Gold support subscriptions, and analog cards that connect the Switchvox software with legacy analog phone lines, phones, and phone systems— all for approximately $50,000, a fraction of the competition.

Getting rid of the headaches of a legacy phone system and moving to a more reliable communications solution were critical goals for LifeCare’s communications upgrade. But there were other needs and unexpected benefits realized once Switchvox was deployed.

“By law, we have to record every call that comes into our 911 call center, properly log it, and ship it offsite to be placed in storage for 7 years,” explains Pozywak. “It has always been a very challenging process with the Nortel system involving multiple steps in which we had to punch down the wiring into open-ended slots, and jumper it over using a plug … it was a mess. With Switchvox, recording is integrated into the system, so all that went away.”

Pozywak says it cost about $3,000 to upgrade their core 6500 switch in the data center from 110 volts to 240 volts, essentially upgrading the entire line-based chassis so it could handle the power required to record, log, and transfer the data. The upgrade also greatly improved call quality.

“The system is completely web-based so I can be at home or anywhere in the world and all I have to do is go to my computer and pull up our webpage in Switchvox to see what is going on,” says Pozywak.

In terms of Switchvox special features, Pozywak says they have integrated Google Maps into the Switchvox switchboard so that when a call comes in, they know from where the call originated. With GPS built into cellphones, the location trickles down to LifeCare within minutes.

Dispatch often uses Switchvox softphones while the office staff uses the high-end desktop IP phones. Out in the paramedics’ garage, they also use advanced IP phones, which prove to be durable enough to take the repeated use. Many of LifeCare’s supervisors utilize the Switchvox mobile app because they are so often away from their desks.

Competitor VoIP telephone systems with the flexibility and expandability of Switchvox would have cost LifeCare anywhere up to six times as much the price they paid for Sangoma’s solution. Also, with N2Net providing their SIP trunking service, the company’s monthly long distance charges are significantly reduced.

In a little over two years, the savings LifeCare is enjoying completely pays for the phone system itself.