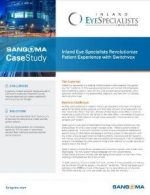 As they were preparing to expand, Inland Eye Specialists (IES) was running four aging Nortel digital phone systems with their data network wired separately from their voice lines. Aaron Reymann, Director of Operations, knew that, in order to implement a state-of-the-art call center at the main office, they needed to build out data network infrastructure to include voice, especially if they wanted a more versatile VoIP system.

Aaron says he was open-minded about choosing a new phone system but had prerequisites for what a new system needed to do. “When a patient called in,” Aaron explained, “I wanted the phone number to query the patient database for specific account information and display a summary screen for the operator with any notes, previous appointment scheduling details, insurance and demographic information, and whether there was any balance on the account. Then it needed to re-query the database for other patients living at that address to provide records on anyone else in the family.”

Aaron’s second request for an updated communications system was a little more challenging. The new system should integrate with the current phone infrastructure and communicate with the aging Nortel system at the main office, creating a centralized hub for all five offices.

“I really wasn’t sure how to make that work, or even if it was possible until we put the Switchvox through its paces in the demo,” he admits. “Nortel has been out of business since 2009 and most of the equipment is secondhand or refurbished. The BCMs were not up to the call center job, but they still worked.”

The final kicker in a quest for a new system was budgetary. Sometimes, you can find everything you want and need in a system, but the costs exceed your budget.

“We were looking to generate efficiency, quantity, and quality simultaneously,” he says. “It was about looking ahead to make sure the Switchvox could handle significantly more calls in an efficient manner as we launched the call center in April 2014, but as it turned out, the Switchvox was the best choice from the larger perspective as well.”

Aaron says price points were a significant reason why they went with Switchvox, especially when comparing it with a comparable Cisco product. Every exam room had a phone at each of the five offices, as well as each employee workstation. With the addition of the hardware required for the call center, they were facing a massive expense if they completed a forklift upgrade of all telecom hardware simultaneously.

Aaron’s foresight and logic set a precedent for improving communications while preserving the short-term integrity of the existing but aging technology. Rather than ripping out the old BCMs, he found a way of working with Switchvox reseller Syndeo Communications to build a backwards-compatible telecom platform that is at the same time a pathway to the future. Rather than throwing good money after bad, whenever old phones or refurbished BCM components break down or require replacement, IES replaces them with new Switchvox VoIP phones and hardware.

“We kept the Nortels in place and configured them to communicate with the Switchvox system,” he says. “The satellite office BCMs talk to the BCM at the main office and call center using the normal flow of data, or IP traffic. The BCM turns around and talks to Switchvox using T1 circuit emulation, creating a centralized hub for all of the others.”

Aaron’s vision paid off just a few months later. After fully implementing their new Switchvox system with advanced UC features, Eyecare Services Partners, a national ophthalmologic, optometric, and ambulatory corporation, purchased the IES brand. After seeing the adaptability and efficiency of the call center with its Switchvox telecommunications set-up, they expressed a desire to replicate it at many of their other practices.

“We set up the IVR so calls never ring directly to the front desk, but instead go into the call center. The ability to track calls and pull reports has shown that the practice is getting an unprecedented 100 calls per call center team member per day, so you can understand how hectic it was before,” says Aaron. “I can change the call flow to and from certain departments, change call options, change extensions, and move phones whenever I need to, something that was very time-consuming with the Nortel. In addition, we have several employees who move from office-to-office and don’t really have desks of their own. Switchvox mobility allows those employees to use softphones and they love it.”

Inland Eye Specialists is also saving money with their new Switchvox in several ways. They are no longer paying a phone provider at each location. And they have replaced long distance with a SIP provider, so they no longer have that expense. All calls come through the hub. They can see where the calls are coming from, but the Switchvox changes the area code to that of the hub, which means they actually get a call volume discount.

“I don’t believe you can save yourself rich,” Aaron says, “but we save a lot of money with our Switchvox. First, the fantastic price points were much better than those of other systems we demoed were. When you consider the deal we got to buy the system outright rather than going with a hosted or cloud system, Switchvox was just what we wanted and needed!”