With a large sales force throughout the United States and Canada, Ganz designs, manufactures, and markets several lines of home décor items, gifts, and home fragrances to specialty retailers worldwide. 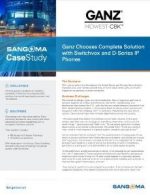 Renowned for design, style, and trend leadership, Ganz’s long-term goal was to network together all of their administrative, call center, warehousing, and distribution sites across the U.S., with the first centralized directory located at their Elkin, North Carolina, location. It would allow them to call extension-to-extension anywhere within the company. With 15 locations impacted by the new phone system, Ganz wanted input from multiple departments across the country.

“We discovered that telecommunications is a complex industry where each vendor uses their own terminology for everything, even when referring to the same things,” says project lead Todd Little. “So we asked users from multiple departments to contribute to the process. We asked them, ‘From your point of view, what is most important in a phone system, based on your job duties?”

Some consistent factors surfaced from the varied answers including ease of use, ability to access voicemail from mobile devices and tablets, and having call queues and ring groups. The answers, included as line items in a weighted matrix where priorities were rated on a scale of one to ten according to level of importance, gave Ganz a starting point and allowed them to compare apples to apples.

To the preliminary weight-comparison analysis, Little included certain expectations from the IT department. These weighted priorities included flexibility and ease of implementation (since linking the 15 sites would happen in progressive phases and not all at once), whether to enter into a maintenance contract with a vendor or maintain the system themselves, and cost.

They looked at systems by many big-name providers. After someone on the team suggested Sangoma, they added Switchvox to their list of solutions. Ganz then plugged all the telephony solutions into the grid so they could compare the aggregate scores of their top priorities with the telecom offerings. Sangoma and one other scored in the mid to high seventies percentile as the perfect solution.

Ganz had an IP infrastructure but spent about three months running new cabling and setting up a separate connectivity network at the Elkin facility. They purchased 85 D-Series IP phones and a Switchvox appliance that could support all of their users— an ideal fit for use in call center operations.

“We saw immediate savings… [And] tech support was great helping us install [the new phones], although we really like how easy they are to use, requiring little-to-no training.” The built-in feature-set lets employees easily access all of their contacts, make calls, and access call queues, directly from the phone interface.

“From a maintenance perspective, these phones save us time because they can be pre-configured from Switchvox,” says Little. Because the firmware is updated automatically, once the technician puts a phone on an employee’s desk, they never have to touch it again. “We really like the phones and will be deploying more as we continue building the site-to-site dialing network that connects all 15 sites.”