Switchvox Brings ELSA, LLC Out of the Dark Ages While Saving Them more than $110,000 over 10 Years

Located in Elwood, Indiana, ELSA, LLC, along with their Japanese parent company Sakamoto, specializes in the fabrication and assembly of fuel tanks, exhaust systems, and structural components for OEM customers and applications. 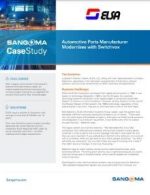 When the ELSA Corporation purchased their digital phone system in 1998, it was based on technology designed in 1986 to last for 30 years. As voicemail technology became mainstream, they happily added a component Voice Mail System to improve on communications. However, as they closed in on the end of the 30-year lifespan of their system, the 1980s technology, regardless of how sophisticated it was then, may just as well have been a relic of the Dark Ages.

Bob Bakehorn, ELSA Information Systems Group Leader, says the system was decidedly inefficient and was costing the company a lot of money. “There were very few technicians still available to repair it, and when we finally found someone knowledgeable in [our] telecom equipment, it cost $700 every time he walked through the door,” Bakehorn says.

The legacy system also had few features. “We had added the Voice Mail component. But it had become outdated, and you had to listen to every saved voicemail in order to get to the current message. We didn’t have Caller ID, and that was very important. If you walked down the hall to the bathroom or to consult with a co-worker, when you got back to your office, people would say, ‘You had a call while you were gone,’ but you didn’t have any way of knowing who it was if they didn’t leave a message. It was very frustrating.”

Bakehorn says to make matters worse common administrative tasks were extremely difficult. “Punching down phones was a nightmare because you had to trace the wiring back to the patch panel, which was all tangled and mislabeled most of the time.”

Searching for a new communications system was a long process for Bakehorn. “We needed a replacement system we could administer from in-house, but without a budget and no idea what a new system would cost, I asked around for recommendations and did a lot of Internet research.”

Even before starting the selection process, Bakehorn knew there would be infrastructure upgrades required. ELSA had a data network, but because of the amount of existing traffic, they were advised not to add voice without upgrading the fiber. To get the best quality calls, it was worth the extra investment in the fiber network.

“We had a great deal of wiring and cabling that needed to be done, and several of the cabling companies who put in bids also sold business phone systems. They asked to demo their product. So, with all the recommendations and a follow-up call from Switchvox reseller, Pinnacle Voice & Data, I went through eight or nine presentations and demos,” Bakehorn says. “Some of the proposed systems weren’t large enough to handle the 125 to 150 phones we needed. One of them was on the mark in terms of capability, but had monthly licensing fees per phone that, when calculated over a 10-year period, were $110,000 higher than Switchvox.”

In order to ease the transition from an antiquated phone system into Switchvox, Pinnacle was able to get ELSA’s new phones up and working prior to cutting over to the full system. Even though employees could only call internally and leave voicemail and couldn’t call out or take outside calls until the final step, it was a convenient way of teaching the employees how to use the new system.

On the old system, ELSA had rotating operators who answered the phone. They also ran a second and third shift so they had to set the phones on night-ring after hours. It was practically impossible to call in and get an answer at that time. In addition, being a production facility, it was often difficult for the receptionist to track people down to take calls.

“We immediately saw that we could get the job done faster using the Switchvox IVR,” says Bakehorn. “Now the phones are set to automatically distribute calls to the proper department and if the caller needs the receptionist, they just dial zero for the receptionist’s queue. Outside of business hours, department supervisors can answer calls.”

Affordability was one of ELSA’s biggest requirements, and it needed to cover more than the phone system – it also had to include phones. As a production, molding, and assembly facility, ELSA needed IP phones that included some higher-end executive handsets; down on the floor and out in the rest of the plant, they wanted an economical alternative for phones.

“It wouldn’t do to have a $400 phone set on the floor where they are often exposed to a harsh environment and where they are easily broken or can get wet,” Bakehorn says. The flexibility and affordability of Switchvox enabled them to buy a mix of IP phones to meet all the company’s needs, without breaking the budget.

Of all the benefits to the new Switchvox system, Bakehorn says they most appreciate caller ID, visual voicemail, and the company IVR. From an administrative standpoint, call reporting is also an excellent tool.

“If a call to the main system got dropped, hung-up on, or no one ever picked up, we used to have to determine whether it was worth a $700-plus tech call,” Bakehorn says. “If someone says that happens today, we can go into the call logs and find that call.” The company had a complaint like that recently and Bakehorn’s team was quickly able to verify that the cellphone from which the individual was calling from was dropping the call, not ELSA. Normally, the company would have had to pay a lot out of pocket for that service call (even if it wasn’t their phone system causing the problem). With easy access to call logs and the reliability of an updated system, the company can rest easy with fewer headaches and the bonus of less maintenance expenditures. Bakehorn says, “When you look at cost savings, it is things like that which add to the overall savings with Switchvox.”