Community Housing Works (CHW) is a non-profit realty and lending service based in San Diego, California, offering comprehensive programs that help over 8,000 recipients each year by providing opportunities to rent, own, and achieve financial independence.

CHW builds beautiful, safe, green communities that working families can afford to rent. Among their services, they offer financial coaching and leadership support, as well as academic support for youths. 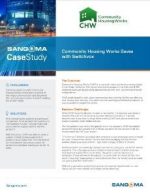 When CHW made the decision to open a new facility, the decision was made to reassess the cost of their existing business telecommunications. It quickly became clear it was time to let go of the existing CallTower phone system and invest in a better, more reliable solution.

The first problem was tied to the growth rate of the company. CHW had added personnel slowly but steadily over a 15-year period since the company had first implemented the CallTower system.

“The former IT director just called Utah whenever a new employee came on board and said, ‘I need a new phone’. No one was acknowledging that the bill was steadily creeping up every month,” says Scott Granger, CHW’s IT Director.

Another problem uncovered by Granger was that as costs grew, so did the service problems. The utility-type service provided no face-to-face interaction and very little technical support from so far away. “Superior customer service is a philosophy I have adhered to throughout my career and I am proud of that. As a result, I have high expectations in terms of service from my vendors and we were not getting that from CallTower.”

With the organization quickly moving toward enterprise requirements, a more robust solution was needed, so Granger started searching.

“We also wanted our own phones and local support,” Granger says. “[Many options] had what I call a fit-it-and-forget-it attitude. They would come set it up for us and then leave it for us to manage with only minimal support.”

When Granger turned his attention to the Switchvox Unified Communications (UC) system, he found the perfect solution at a price CHW could afford— by a local company, SDTEK, that provided a fully managed solution.

Switchvox wasn’t entirely new to Granger, and he knew it had the capabilities and reliability he needed, in addition to the cost savings. He first discovered Switchvox while working at SDTEK. The San Diego business specializes in communications.

“I was certain that when we compared systems based on cost, feature sets, and service from SDTEK, Switchvox would win out; as I trusted [SDTEK] to meet my expectations in the technical support area,” says Granger. “What I found was that with Switchvox, we could save $450,000 in 5 years.”

That was substantial savings for any business but especially for a nonprofit. Granger said he was immediately sold.

“We purchased the Switchvox system along with 115 new phones,” says Granger. “We also bought an extra Switchvox appliance as a cold spare for onsite emergency recovery. The spare would allow us to be back up and running in 5 to 10 minutes if we were to face a disaster that took the system down.”

The robust set of all-inclusive features that Switchvox offers was another selling point for CHW. “We really enjoy the Chat integration,” says Granger. “The solution we had previously was a desktop application that was supposed to integrate with Outlook, but it only worked half the time, so the Switchvox UC features are a welcomed addition. We also have voicemail-to-email integration. With the old system, we had usernames and passwords, which is common enough, but the Outlook configuration made it hard to tie into our infrastructure.”

Also, Switchvox’s user-friendly web interface gives users full control over their connection and call routing, so they now enjoy the ability to push their calls to a cell phone.

For employees, the intuitive, easy-to-use design made transitioning to Switchvox almost effortless. It required little training to get the staff up-to-speed on how to record their greetings and manage their phones. What training that was required, SDTEK was able to provide. “They were concerned about how accustomed we were to the old system and didn’t want there to be a huge learning curve. The new system had to be functional and easy to use — and Switchvox is just that.”

Gone are the days of depending on expensive remote support to handle common management functions. If CHW needs to add a new employee or move an employee from one office location to another, it can be handled internally or through a call to SDTEK for local support.

Another important benefit of Switchvox relates to the IVR trees CHW maintains. There are approximately 90 IVR trees, including two that are bilingual. The auto attendant can now send calls into the informational system or ring a line directly. “Switchvox has been a huge success, not just in terms of money savings and ROI,” added Granger, “but also in features and ease of use.”