Bosselman started in 1948 as a single truck stop known for its delicious food in Grand Island, Nebraska. Today Bosselman Enterprises, now one of the most successful businesses in the Midwestern United States, is a conglomerate made up of two divisions: retail and energy.

The retail side consists of more than 40 “Mayberry-style” Pump & Pantry fuel stops; hundreds of Pilot Travel Centers and Flying J Travel Plazas; over 40 Boss Shop automotive service centers; dozens of hotel franchises; as well as dozens of Grandma Max’s restaurants and diners; and food courts and various other roadside eateries. 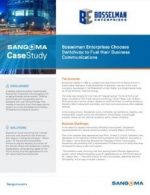 In the search to replace their legacy phone system, Bosselman requested bids from several solution providers.

One of the resellers they approached was Bizco, located in Lincoln, Nebraska, who specializes in the Switchvox Unified Communications (UC) platform. According to Tim Seaton, Senior Business Development Manager at Bizco Technologies, Bosselman was operating with a sophisticated IP infrastructure for data when they contacted him about a new VoIP system.

“The problems were mounting with their existing hybrid digital phone system, which offered only partial voice IP capabilities and no IVR functionality at all,” Seaton says. “They were looking for more functionality, additional features, affordability, and an easy end-user interface.”

In comparing the features sets of different alternatives, Bosselman’s management team for the project found different aspects they liked. But when it came to comparing price, however, the all-inclusive feature set of Switchvox versus the pricey, a la carte, pay-per-feature approach of its competitors made it an easy choice. Switchvox won hands-down.

Originally, the Bosselman corporate office consisted of over 140 employees, including mobile users. Shortly after implementation of their Switchvox phone system began, they added a 10-man call center, bringing the employee count up to around 150.

They wanted the flexibility of having all calls come into a centralized location but needed an easy user interface in which the receptionist could simply drag and drop calls into any number of call queues or IVRs. They wanted to be able to direct calls to specific departments, like the executive offices or the call center, while also being able to ring employees working from home, or push calls out remotely to workers in the field via cellphone, something they were unable to do with the old system.

“Management wanted every phone to ring at least four times at a desk before rolling over to the employee’s cell phone,” Seaton says. “With the older system, this wasn’t possible.”

“Now the calls can be forwarded to voicemail, which is available no matter where the employee is located, whether they are in a meeting, out of the office, on vacation, or working from home,” Seaton reports. “The caller never knows the employee isn’t in the office and the employee can prioritize the calls they answer based on caller ID.”

The implementation of Switchvox at the corporate office was successful and, as it turns out, also planted seeds for the future.

“They are quite blown away by all the functionality— some they asked for specifically but a lot more they really didn’t know they would have and more still that they just have not yet ventured to use,” says Brad Osbourne, senior IT Manager for Bizco.

The opportunity to use Switchvox in the company’s new call center also presented some interesting options for Bosselman. For instance, both big box and proprietary software packages, such as CRM software for call centers, integrate easily with Switchvox to provide immediate access to caller account information.

Bosselman is researching these types of software options as well as exploring other advanced Switchvox features as a way to help improve operations at the call center.
“They have whisper listening on their radar; in fact they actually have the ability to do it, as well as call recording, both which are excellent training tools for a call center environment,” says Osbourne.

The company is also excited to build out an infrastructure that will accommodate IP phones in every remote Bosselman location across the country, all connected through Switchvox. The plan, according to Osbourne, is to connect all their remote locations through the central Switchvox solution in Grand Island. Because of the number of locations, it is an ambitious plan that takes a great deal of planning, but it will be a major accomplishment for Bosselman.

Fortunately, Switchvox is a powerful but flexible UC solution that can be built out across the entire Bosselman network to link all of its locations to the corporate office. It is just another reason why Bosselman Enterprises considers Switchvox the best choice in communication solutions.