Based in Becker, Minnesota, just northwest of Minneapolis, Becker Schools has approximately 2,800 students and a staff numbering about 300. The campus consists of five separate buildings housing hundreds of offices and classrooms for kindergarten through 12th grade students. 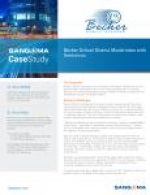 Becker School’s outdated communications system was grossly inefficient and required that every building have a dedicated server housed on-site. This meant each building essentially had its own telephone system with no centralized point of communications. Equally frustrating was that the old system lacked advanced or web-based features. The most costly problem was that the old system was in constant disrepair and had become expensive to maintain.

“We were burdened with service calls that at the very minimum averaged $300 in service costs,” says Becker’s technology assistant Sumre Robinson. “It wasn’t just for fixing things either. We had to make a service call for everyday activities like adding or rerouting a phone line.”

With the costs to operate the legacy system skyrocketing and wait times for service calls causing serious inconvenience, Becker Schools made the decision to look for an affordable, easy-to-use phone system that would provide stable connectivity to all buildings. The goal was to unify communications across campus for the primary, intermediate, middle, high school and district administration buildings, with a plan in place to switch to Unified Communications (Uc) the following year.

However, an unexpected system failure of the legacy phone system pushed up the school district’s timeline for upgrading. During the summer session, a vital part of the Becker Schools’ system crashed, leaving them completely without voicemail capabilities across most of the campus.

To quickly resolve the issue, Becker got in touch with Line 1 Partners, a Switchvox reseller located in the Maple Grove suburb of Minneapolis, MN.

“Our priority was quick installation,” says Robinson. “We had six weeks before school started back in the fall. Day-to-day operations were critical, even through the summer session. We hired someone to come in and upgrade and replace over fifty percent of our archaic category 3 wiring with category 5 and 6 cable to support VoIP, and we had to upgrade and expand our current backend network gear in order to provide power and network connectivity to our new VoIP telephones.”

“At that point, there was no time for anything but ‘Rip & Replace’,” says Clayton Schaefer, president of Line 1 Partners. “We had two main objectives: to stabilize the Ethernet switching platform so we could install the Switchvox appliance; and to replace outdated equipment, which included more than fifty old wall phones that had been running off old cat 3 cabling. We replaced them all with high definition IP phones.”

“It was a large project encompassing the upgrade of an entire digital infrastructure to VoIP and having to install new equipment in hundreds of offices and classrooms campus wide in such a short timeframe”, Schaefer admits. “We came right behind the cable installer, however, and tapped into that upgraded cable to get things moving. We also analyzed call volume across the campus to determine which model of phones worked best for teachers in their classrooms, in community spaces like the cafeterias and libraries, and in the administrative offices.”

In addition to the Switchvox phone system, Becker Schools also purchased over 400 Sangoma D-Series IP phones. Twenty-five of the Sangoma executive phones went into the district’s administrative offices since they have the highest call dispatch levels. As an added bonus, the IP phones are easy to install and configure, which helped save time and eliminate any training issues. By simply plugging in the phones, they automatically find the Switchvox server so you can start using them right away.

“In hindsight, I think the biggest surprise is how quickly and deftly the Becker IT staff took over the Switchvox system,” says Schaefer. “Not one member of the technical staff had ever administered a telecommunications system before. They were completely new to VoIP and had only modest telecom programming experience, and yet in the past year and a half, they have only needed us once.”

“We have been extremely satisfied with the Switchvox system,” says Robinson. “I can confirm that Line 1’s advice was solid, and I feel we have purchased the best system for our needs. I am able to add, delete, and reassign any extension at any time without support. The once or twice I have needed help, remote assistance was sufficient.”

“We knew we wanted the voicemail-to-email system so we could retrieve messages, but we also wanted to be able to archive those messages in email,” Robinson continues. “We wanted pre-recorded greetings with a call tree so calls could be distributed to the appropriate department or people, and we wanted automated greetings with multiple key options. We have all that plus more.”

There were a couple of unexpected conveniences of Switchvox that Robinson was thrilled to discover. One was the ability to record calls, which turned out to be a much-used phone system feature for a school system. The other benefit was the fact that phone configuration remains with the phone no matter where you move it without dependency on a physical phone line.

“On the old system, not every employee could have access to voicemail or email. Now they can,” Robinson says. “There are significant savings with Switchvox because it has eliminated all of those expensive service calls. Now, rather than needing someone to come out and physically move phones and extensions and then completely reconfigure every phone, I am able to do it myself!”