Home > Articles > Time In Space: Without Our Watches We Would Be Lost

Time In Space: Without Our Watches We Would Be Lost 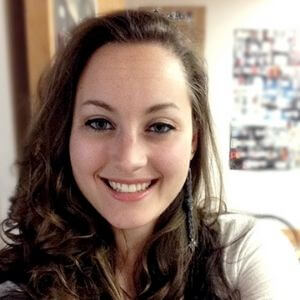 Most don’t realize the connection between time keeping and navigation. Until a clock that remained accurate at sea could be developed, mariners could only guess at their longitude. Today, precise GPS positioning would be impossible without use of atomic clocks aboard satellites. Time keeping, piloting and navigation have always gone together. So, when astronauts began to climb aboard spacecraft, there were lots of clocks on board and on the astronauts’ wrists. 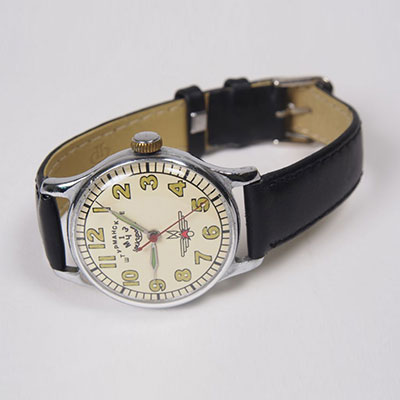 When Yuri Gagarin became the first man in space on April 12, 1961, he wore a mechanical Sturmanskije watch just like this one. (Sturmanskije translates roughly to “navigator” in English.) It wasn’t a special watch exactingly chosen by the Soviet space agency as a space-worthy timepiece. It was Gagarin’s own, one he was issued after graduating from the prestigious Orenburg Flight School in 1957 after two years of training. In the 1950s, it was typical for graduates of flight school to receive a watch.

The standard Sturmanskije in 1957 was a 15-jewel manual-wind watch with a 38 millimeter face, though it’s possible Gagarin would have upgraded his to the 17-jewel edition by the time of his flight aboard Vostok 1.

In keeping with the Soviet industrial style of the era, the Sturmanskije was an extremely basic and functional watch. It had a plain face and lacked frills like a date keeper. It worked but was hardly a status symbol. As the cold war thawed and Soviet-American relations improved, US astronauts offered as gifts the coveted and far more stylish Omega Speedmaster (also displayed here) and the cosmonauts delightedly wore them on the Apollo-Soyuz mission. 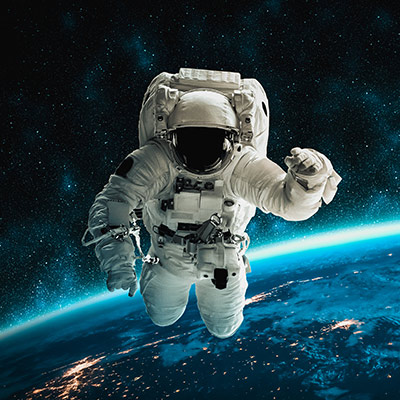 Watch Out for Space-Age Technology

Sangoma is a trusted global leader in delivering value-based Communications as a Service (CaaS) solutions for businesses of all sizes. We provide seamless communications tools for voice, video, chat, and collaboration on any device, designed to integrate all of your mission-critical operations for the best experience in the industry. 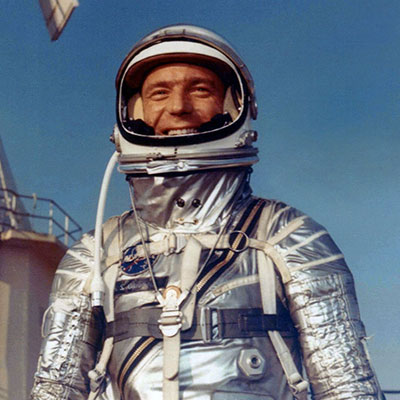 Scott Carpenter was the second US astronaut to orbit the earth. In the early 1950’s, Breitling and the Aircraft Owners and Pilots Association (AOPA) entered into a co-marketing agreement to create and promote the Navitimer, a wristwatch that became very popular with pilots of the era. Carpenter had received one as a gift and liked it. As one of the original Mercury astronauts, he contacted Breitling in 1959 and — since there’s no “mid-day” in space — suggested they make a 24-hour version. Breitling obliged, producing a manual-wind version with a circular slide rule around the face to aid pilots in flight. Breitling sent one of these specially designed Navitimers to Carpenter just days before the launch of his Aurora 7 orbital mission on May 24, 1962.

Carpenter’s notoriety and the fact that this was the first watch in space worn by an American gave Breitling an excellent advertising opportunity; print ads in magazines like Life and Newsweek featured the timepiece next to a real life space man.

Unfortunately, Breitling had made a huge marketing mistake. They had labeled this special 24-hour variant of their Navitimer the Cosmonaute. This was the French word for astronaut but — spelled slightly differently — was also the Soviet word for their spacemen. During the time of the space race and international missile crisis, this gaffe spelled disaster for US sales. 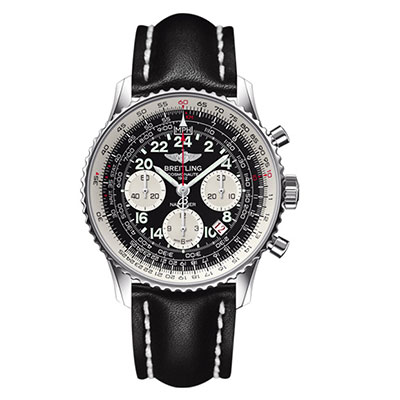 The Navitimer Cosmonaute displayed here is very rare. It’s of the proper vintage and has the same mechanical movement, case design and face markings as the watch worn by Carpenter. Due to the Cosmonaute naming debacle, very few were produced like this at the time, though the 24 hour Navitimer is still manufactured by Breitling today (and, in a retro throwback, is once again labeled Cosmonaute). 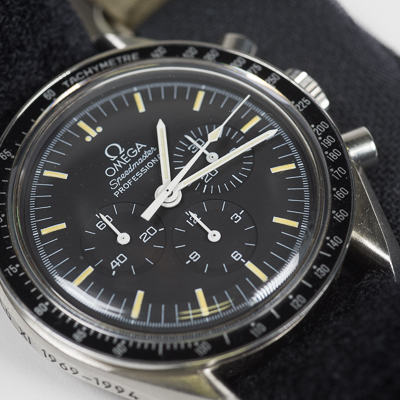 As the watch that accompanied NASA astronauts on their Apollo lunar missions and to the moon, the Omega Speedmaster is the most famous in this collection. But the Speedmaster got its start in space through a mundane path. In the fall of 1962, a group of astronauts went shopping for watches in Houston. Among them was Wally Schirra who bought a Speedmaster. He wore the watch on his Sigma 7 Mercury flight on October 3 of that year.

In 1964, the astronauts approached NASA requesting a watch they could reliably wear in training and on missions. Concerned that an automatic watch, energized as a side effect of wrist movement, wouldn’t be able to wind itself or keep time in a microgravity environment, the agency started testing various timepieces from Rolex, Longines, and Omega. “Testing” meant trying to destroy them as thoroughly as possible. The watches were subjected to temperatures hotter than 200 degrees fahrenheit then immediately frozen, battered in impacts generating up to 40gs, exposed to high pressure, low pressure, and humid environments, shaken, vibrated, and a placed in a highly corrosive one-hundred percent oxygen environment just like the astronauts would have on lunar missions. In the end, the watch with the highest score was the Speedmaster. Today, it remains as only one of four watches officially certified by NASA for spaceflight and the only one certified for use on spacewalks.

Its first official flight came in 1965 strapped to the wrists of Gemini 3’s Gus Grissom and John Young. The watch was also used on Apollo 11 for the first moon landing and was worn on the surface by Buzz Aldrin. It proved its worth on Apollo 13. When the crew — with their guidance computer shut down — needed to execute precision burns of their engine to adjust trajectory on their way back to Earth, they relied on Speedmasters for exact timing. This watch is still marketed as the “Moon Watch”. 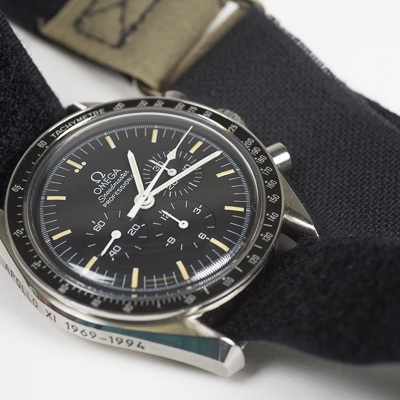 Unlike the other watches in this collection, which are authentic to their time, this is a commemorative edition, created 25 years after the Apollo 11 mission. It sports an accurate reproduction Velcro band, designed by NASA to fit around the bulky wrist area of an Apollo mission spacesuit. In the movie Apollo 13, Kevin Bacon, portraying Astronaut Swigert, is clearly shown punching the stopwatch button on his Speedmaster to time the critical third midcourse correction “burn” that keeps the spacecraft from skipping off the Earth’s atmosphere. The burn required exactly 14 seconds, which is where the hands of our display model Speedmaster have been set. 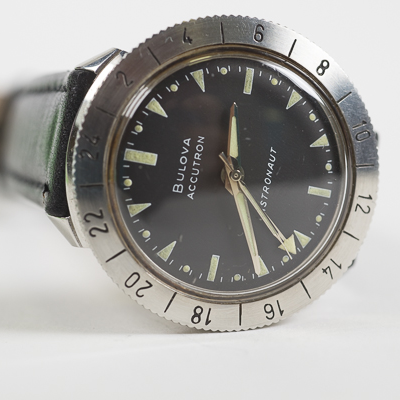 Though it’s named “Astronaut,” this Accutron watch was never approved by NASA as a watch fit for spaceflight. These American-made Bulova watches were tested by the space agency but failed to meet strict flightworthy criteria. Nevertheless, they were a favorite among off duty astronauts, and the mechanisms that make this watch unique have a long and interesting history in space.

Bulova began developing Accutron technology in 1952 with the goal of creating an electronic watch that could keep accurate time to within two seconds each day. The secret behind this accuracy was a tuning fork that divided each second into one hundred equal parts.

In 1957, the Navy asked Bulova to design a timekeeper for its Vanguard satellite, and when it finally reached orbit it carried the first Accutron panel mount timekeeper in space. Bulova Accutrons went on to become the official timekeeper for the Vanguard, Tiros, Explorer, Relay, Syncom, Pegasus, and Telstar programs, and it was the official watch of the X-15 program, the first winged vehicle to make it to the edge of space. It also became the first American made watch in space when Gordon Cooper wore one on the right side (and a Speedmaster on the left) during the last Mercury mission. While in the end NASA formally issued Omega Speedmasters to Apollo program astronauts, the panel clocks in the Lunar Module and Command Module used Accutrons. 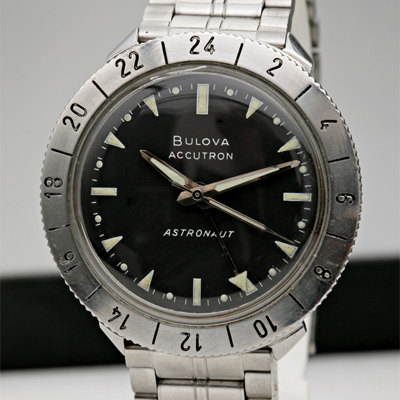 Though the Astronaut watch did not fly on any of the Apollo missions, the technology in the watch powered the primary timekeeping instruments in the Command and Lunar Modules and was a critical element of all automated navigation. So while not a wristwatch, the Accutron was arguably the most important timekeeper of the Apollo program. 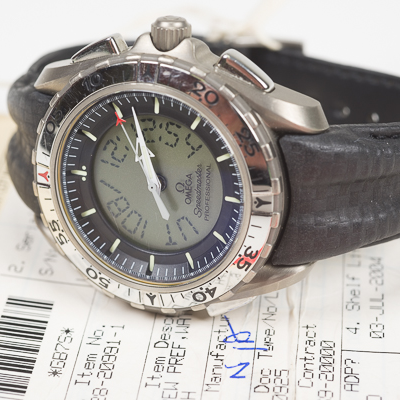 The Omega X-33 was developed as a joint project between NASA and Omega to create a more sophisticated watch for the space shuttle and later space programs. This was the first time a watch was actually specifically designed for use in space. Using quartz for precision timekeeping, it boasts a combination digital/analog display and multiple timing functions, making it an ideal watch for complex operations in space. Requirements included actuators large enough to be operated with spacesuit gloves, an alarm loud enough to be heard in a space helmet, and a T+ feature that tracks mission elapsed time since lift off. 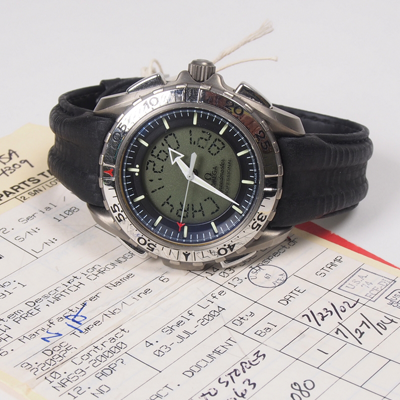 NASA once owned the watch on display. The tags you see affixed to this watch are for NASA inventory tracking purposes. This particular watch was slated to be used on a Space Shuttle mission but was removed from stock after delays in launches after the Columbia disaster. 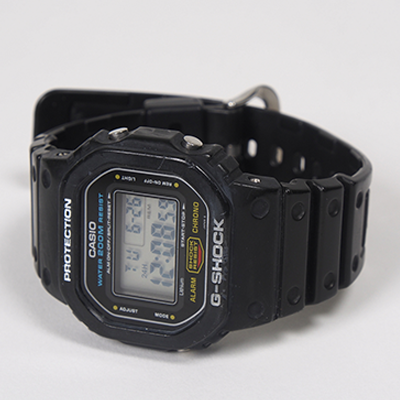 The G-Shock DW-5600 is another of the few watches that NASA has qualified for spaceflight. Housed in an extremely durable machined steel case, its inner workings use floating module technology kept in place by internal shock buffers, all safely stored behind thick mineral glass. Beyond being durable, this watch is multifunctional. It can manage and display multiple times (like local time in Houston and mission elapsed time), work as a stopwatch, manage countdowns, and boasts a battery life of more than ten years. It’s also water resistant, which might not seem necessary in space but does promise to improve its active lifetime on an astronaut’s wrist both in space and on Earth; the DW in the name stands for “Digital Water resistant.” For all its impressive features, this watch’s easy-to-read digital face made it a favorite among astronauts, specifically Shuttle astronauts. Many found it useful when timing precision mission events or running tightly time controlled experiments. 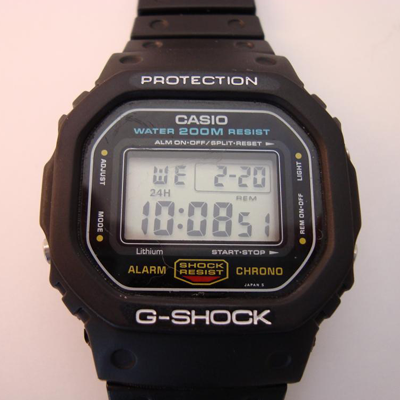 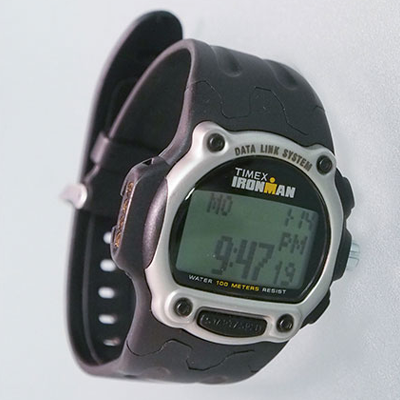 Another of the few NASA-approved watches is the Timex Ironman, the watch displayed here. Popular with Shuttle astronauts, it’s been likened to the Swiss Army knife of wristwatches. The light-emitting diode (LED) display makes it incredibly easy to read. It can synchronize up to 10 alarms with a calendar based on an external computer, can store up to 38 telephone numbers, identify messages, run up to five countdown timers at once, and display the time of two different time zones simultaneously. The impressive capacity and array of features make it as close as an astronaut can get to wearing a whole computer on his or her wrist, making it a useful tool when running multiple experiments in orbit simultaneously. Unlike a number of watches that have flown in space, these are available for the public to purchase at a reasonable price, usually under $100. 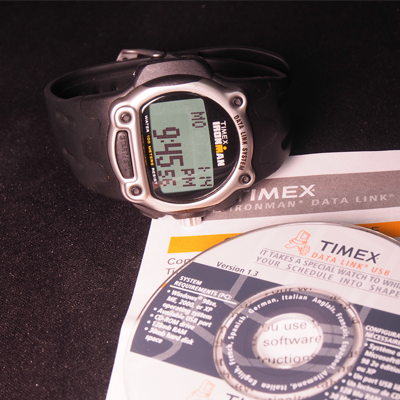 The fourth officially certified NASA watch, the Timex Ironman was the ultimate geek watch of the day (and possibly the great granddaddy of the iWatch). It came with a cable to connect to your computer and several software programs from Microsoft that would run on the watch. The version we have includes the cable and CD (not DVD as they didn’t exist yet) with the software load